The shop is temporarily not available. You still can access your downloads or get the free EPs but purchases are disabled. 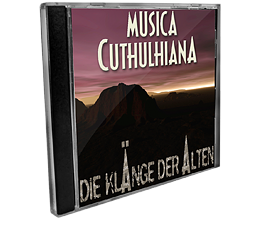 Starting in 2001 with some songs for a internet fanzine, it quickly became a whole album…

The very first tracks of Musica Cthulhiana were free mp3 downloads at www.nyarlathotep.de in 2001. The audio-tracks, songs and music were of course inspired by the Call of Cthulhu RPG and the stories and characters by H. P. Lovecraft (from Azathtoth to the Necronomicon). Later a CD with additional tracks was sold to the readers of nyalathotep.de and the german magazine Cthuloide Welten only.

There weren’t sold large quantities and today the CD is a rarity.

You can hear some songs on the following album “The Fourth”.